“Experience here has exploded the theory that white men cannot stand labor in the tropics, and also the notion that the natives are immune from tropical diseases.” -A.B. Nichols

Tenth Street, Colón, before paving.
Before the mosquito theory was accepted, filth and odors from decaying waste and garbage were assumed to be the cause of diseases, including yellow fever. As part of a massive cleanup campaign, the U.S. moved quickly to drain standing water, eliminate open sewers, and pave streets. Sewers were installed in Colón in 1906. (Note the manhole cover in the foreground.) Afterward, curb forms, which can be seen running along the right side of the street, were built and streets were quickly filled and paved. View in Digital Collection » 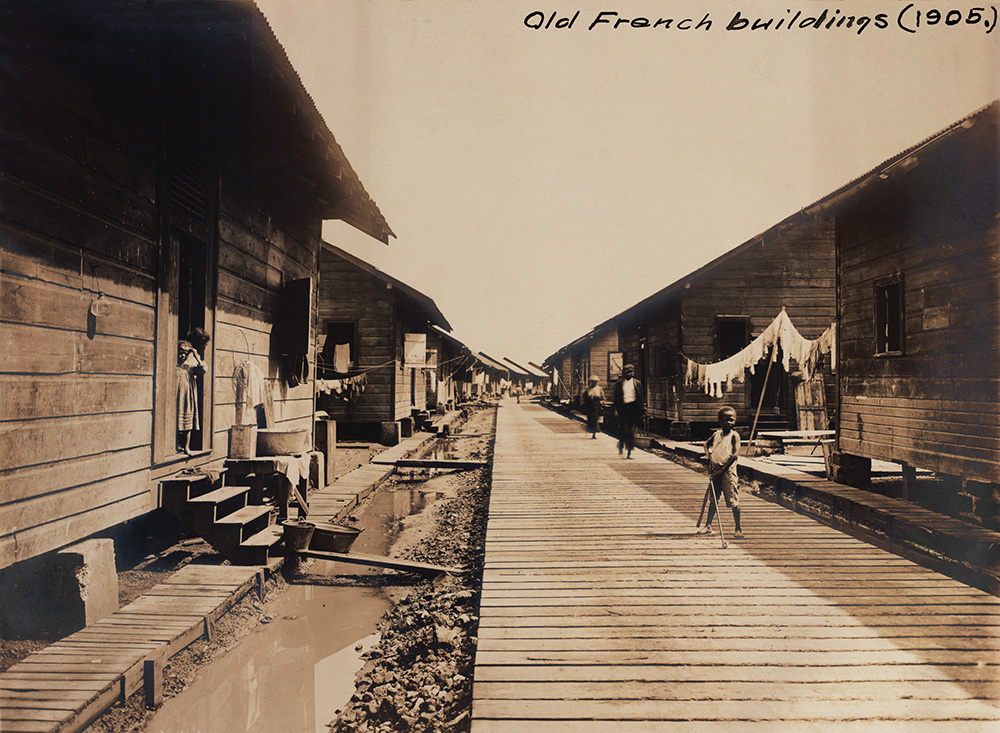 Housing for unskilled laborers in Cristóbal.
Housing provided for unskilled workers by the I.C.C. was rudimentary, at best, and windows often were not equipped with screens. Native and West Indian laborers were assumed to be immune to yellow fever and malaria, but, though many natives were immune to yellow fever, malaria could disable thousands of workers for weeks at a time.
View in Digital Collection » 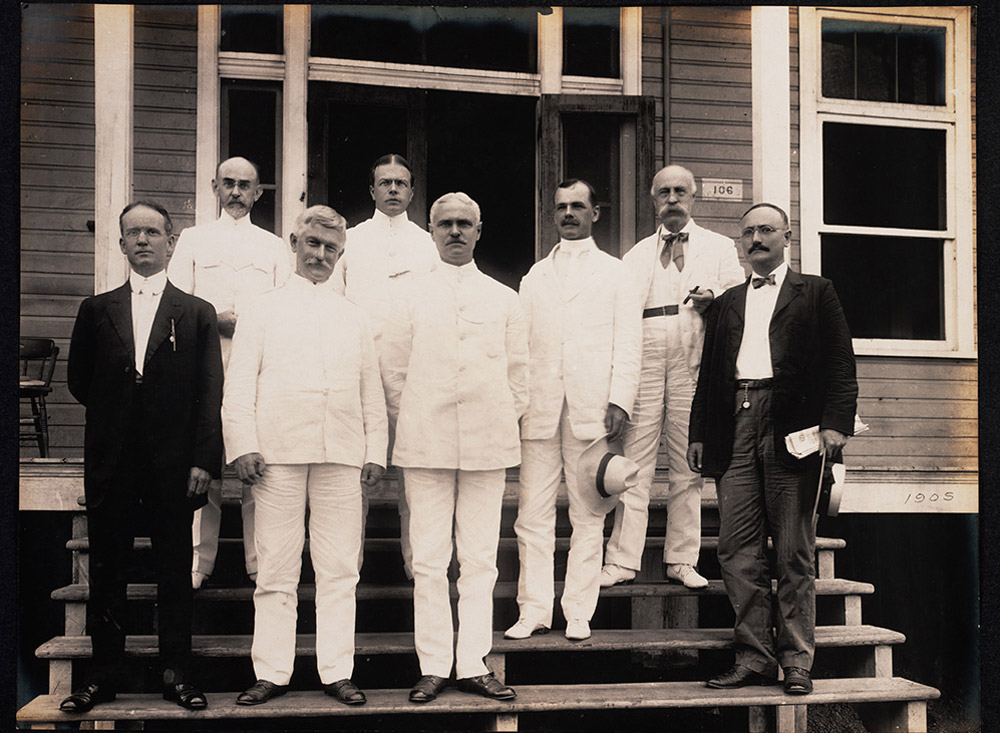 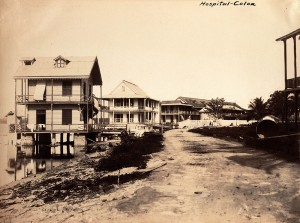 The French hospital at Colón.
The French built the Colón hospital on the water to catch the sea breezes. Unaware that mosquitoes posed a threat, the French did not add screens. While the Aedes egyptii mosquitoes that carry yellow fever do not breed in salt water, the far more hardy carrier of malaria, Anopheles albimanus, can breed in standing pools of salt water. If any fresh rainwater is mixed into the salt pools, even more of the larvae hatch. Gorgas was successful at eradicating yellow fever, but malaria cases, though much reduced, continued to be a problem throughout the Canal project. View in Digital Collection »

Over 22,000 workers died during the French effort to build the Canal, many of them from malaria and yellow fever. The symptoms of yellow fever were terrifying: fever, headaches, back pain, extreme thirst, and black vomit from internal bleeding. The disease could progress to kidney failure, seizures, coma, and death. It was called yellow fever because patients took on the yellow tinge of jaundice when the illness attacked the liver.

When the U.S. took over building the Canal in 1904, Theodore Roosevelt appointed Colonel William Gorgas to the post of Chief Sanitary Engineer. Gorgas had successfully eradicated yellow fever from Cuba in 1901 after the discovery that the mosquito Aedes egyptii was the carrier of the disease. Though discovered in 1881 by Dr. Carlos Finlay and proven through repeated experiments by Dr. Walter Reed in 1900, the mosquito theory was not yet widely accepted in America. Most people, including the members of the Isthmian Canal Commission (I.C.C.), still believed yellow fever was caused by “bad air” resulting from filth and decomposing matter, and that it was spread by “fomites,” which were things likely to be contaminated by the fever victim, such as bedding and clothing. 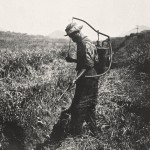 The I.C.C believed Col. Gorgas was wasting time and money by going after mosquito breeding areas and initially resisted giving him the full complement of men, medicines, and supplies that he had requested. After several deaths in early 1905 caused some 500 American workers to flee in panic from the Canal Zone, the I.C.C. asked President Roosevelt to replace Gorgas, blaming him for concentrating on mosquitoes and not on cleaning up filth. Roosevelt, instead, threw his support behind Gorgas, enabling him to deploy 4,000 people to fumigate homes, put up screens, eliminate standing water, and spray drains and pools with oil to kill mosquito larvae. By the end of December 1905, there were no more deaths from yellow fever in Panama. 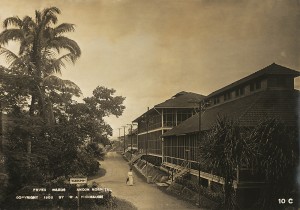 Fever wards at Ancon Hospital, 1908.
The French built Ancon Hospital on a hill above Panama City in 1882. To protect both patients and tree plantings from ants, bed posts were set in trays of water and clay rings filled with water were placed around the bases of the plants. It was the ideal breeding ground for mosquitoes and yellow fever and malaria killed many French patients. Colonel Gorgas eliminated standing water, removed vegetation from around the buildings, and added screens. He also isolated fever patients in screened enclosures so mosquitoes could not spread yellow fever from the victim to others. Gorgas continued to expand and modernize the hospital and in 1928 the complex of buildings was renamed Gorgas Hospital. View in Digital Collection » 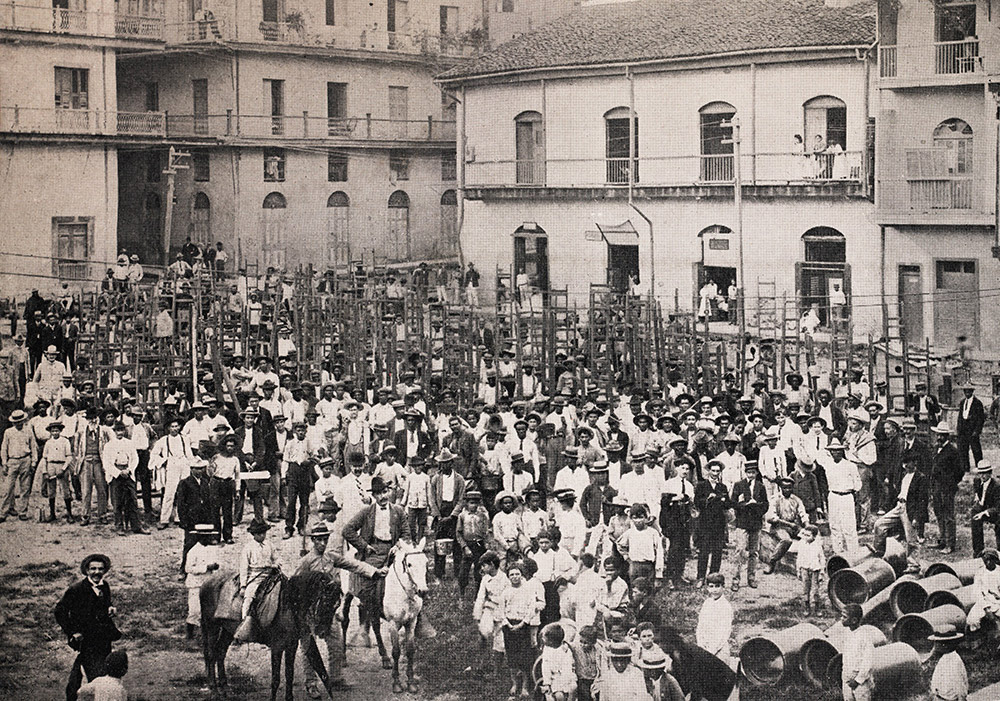