“Nearly every steamer brought white men, wanderers over the face of the globe. [Men]came from S. Africa, from Australia, from Alaska, from the Philippines, from China, and especially from the Spanish American republics.” -A.B. Nichols 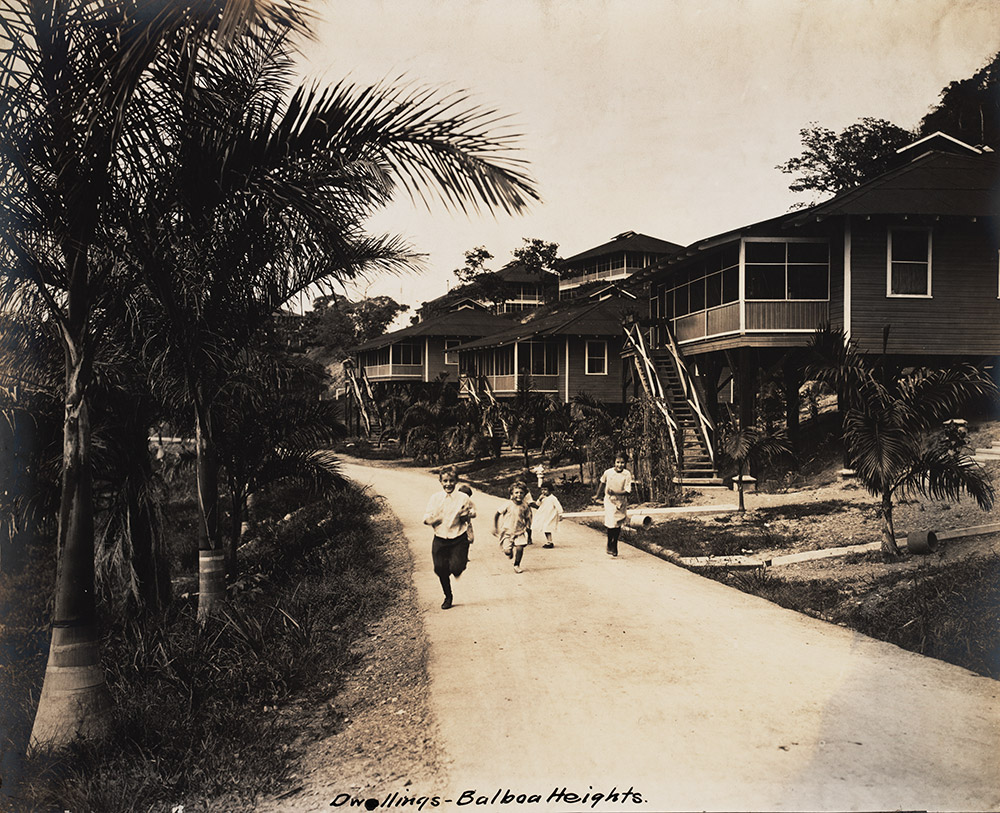 Modest housing at Balboa for gold roll workers.
Gold roll employees were encouraged to bring along wives and children, who were seen as a civilizing influence. View in Digital Collection » 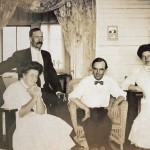 Frank W. Miracle and W.D. Waltman with their wives.
In 1907, Miracle earned $2,700 as a Storekeeper and Waltman $3,000 as an Assistant Superintendent, salaries that entitled them to larger houses. View in Digital Collection »

From 1904 to 1915, the Americans hired a workforce of 42,000 to build the Canal. At the beginning of construction, hiring workers at all levels was a difficult task. The Isthmian Canal Commission recruiters sought to fill the skilled jobs in America, offering good monthly salaries and free transport to the Isthmus, but many of the original recruits were unable to do the jobs for which they had been hired. Also, frightened by yellow fever and unable to face the harsh environment, half of the Americans fled the Canal during the first year of construction.

Although workers arrived from around the world, the Caribbean islands, primarily Barbados, supplied the bulk of the labor force. It was first believed that the islanders were unproductive by nature, but times were tough in their home countries and many were simply malnourished. Once fed a more varied and nutritious diet and given sufficient training, they performed well. However, the preparation of the food was, by most accounts, awful. 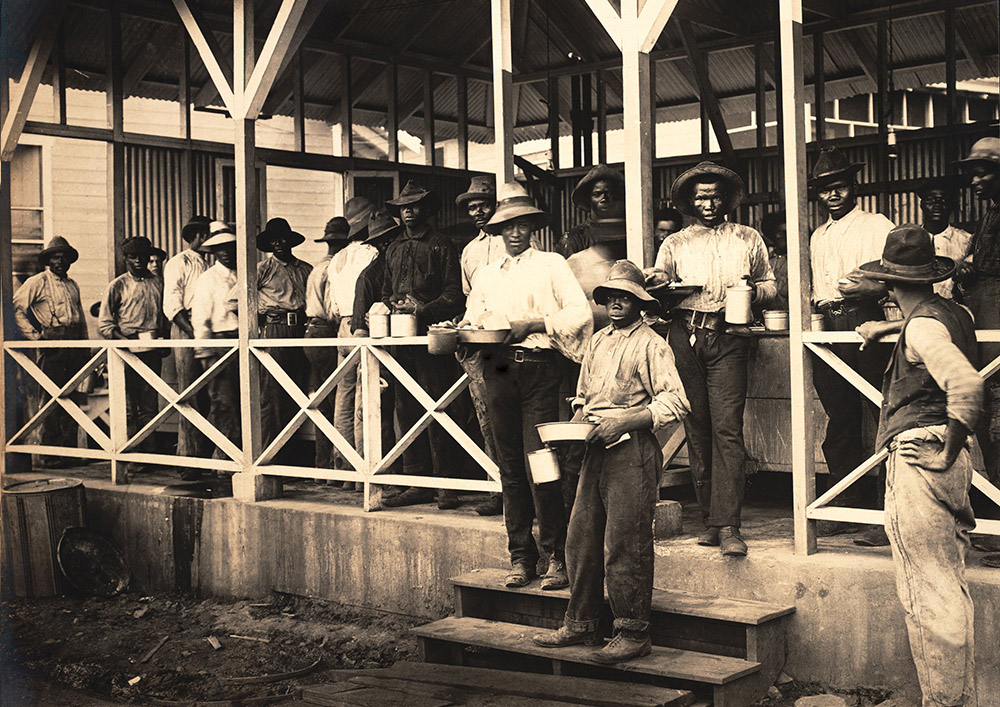 Meal time at an I.C.C. kitchen.
Canal Commission kitchens for silver payroll employees were outside, had no seating, and dispensed such poor quality food that many workers preferred to prepare their own meals over an open fire. View in Digital Collection » 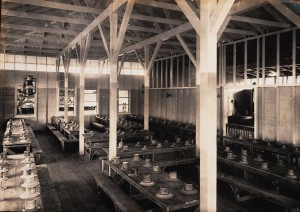 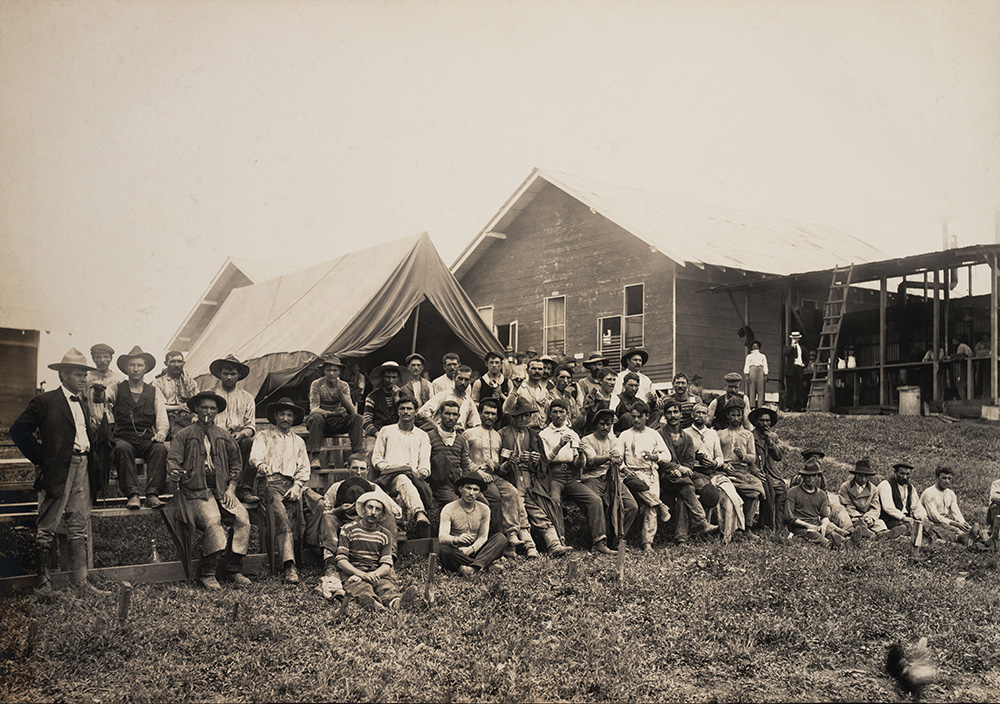 Group of workers from Spain.
From 1906 to 1908, 8,300 workers came from Spain. They expected to find the nice houses, healthful food, and recreational facilities pictured in recruiters’ brochures. Instead they found poor accommodations, unpalatable food, and long days in dangerous working conditions. Though they were paid twice as much as West Indian workers, they resented the segregated structure and organized several strikes.View in Digital Collection » 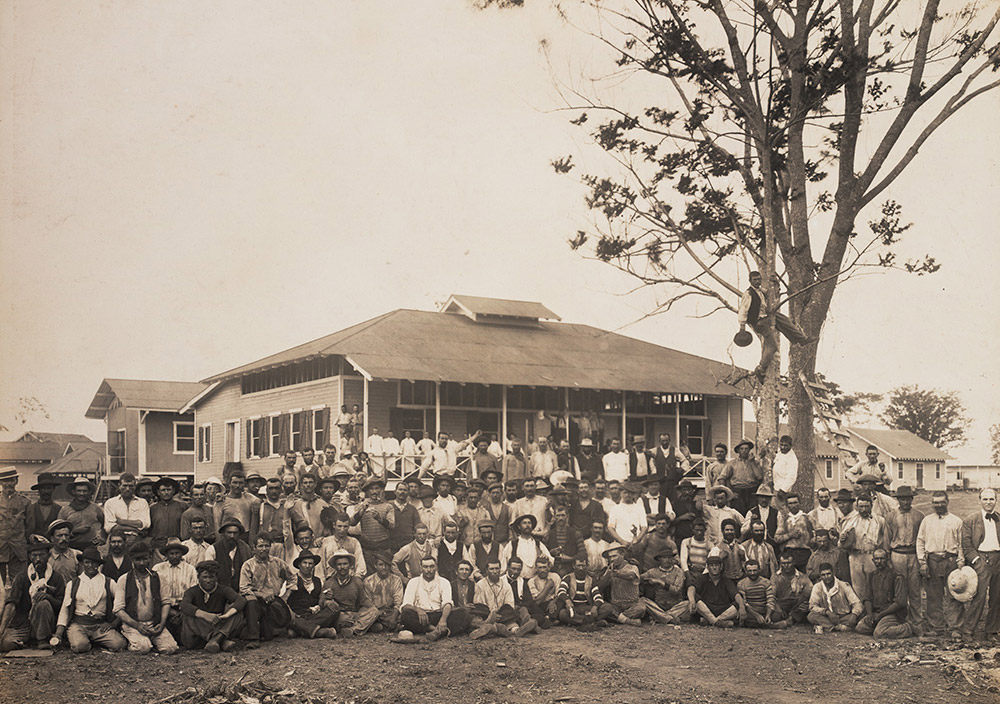 Group of Italian Laborers.
I.C.C. recruiters had less success in Italy, signing up fewer than 2,000 workers in 1906 and 1907. Reports in both Spanish and Italian newspapers of disrespectful treatment, harsh working conditions, and terrible illnesses put pressure on both governments to prevent the migration of workers to the Canal Zone. After 1907, no new labor arrived from Italy, and no new workers were recruited from Spain after 1908. View in Digital
Collection »

Workers were paid under the “gold” and “silver” payroll system. The system was originally intended to designate skilled and unskilled labor but quickly grew into a system of segregation. Gold roll workers were white, primarily American, more highly paid, and paid in U.S. gold coin. The silver roll workers, mainly from the Caribbean islands but also from Spain, Italy and other European countries, were paid much less and in Panamanian silver coin. The system was a color line, with separate privileges, eating facilities, and building entrances for gold and silver workers. 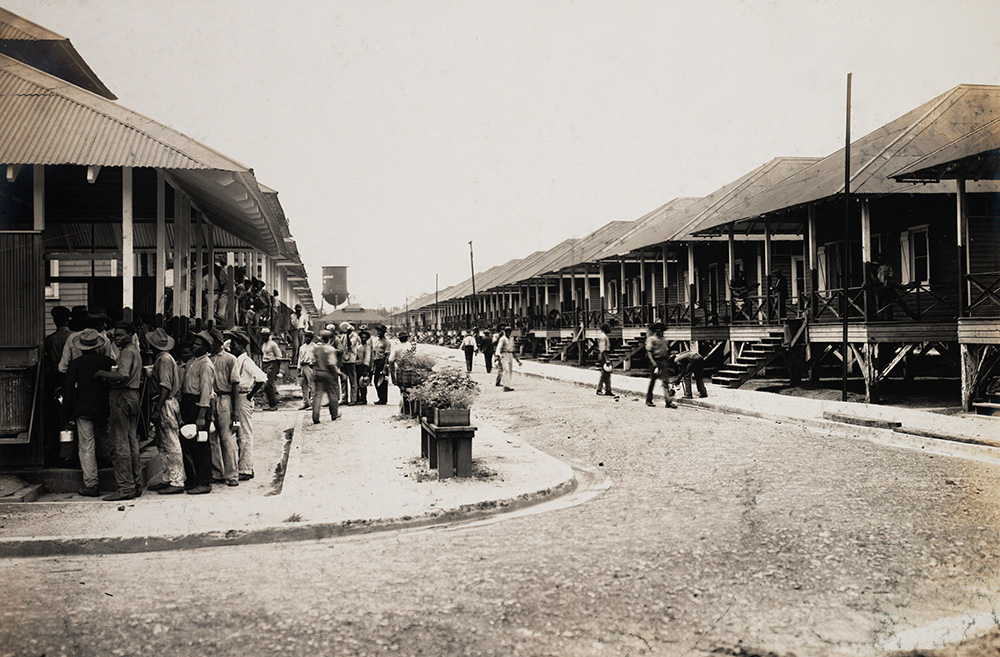 Workers queue up at the outdoor kitchen at Camp Bierd barracks, Cristóbal.
The I.C.C. provided barracks housing to “silver roll” workers without families. The barracks offered racks of cots with little space, and no privacy or personal storage, and sometimes were not screened. Workers were fed at outdoor kitchens that served poor quality food. Some workers rejected I.C.C. housing in favor of living in city slums, shacks, or even boxcars, choosing to obtain their own food. Workers killed on the job were sometimes found with all their savings tied around their waists. View in Digital Collection » 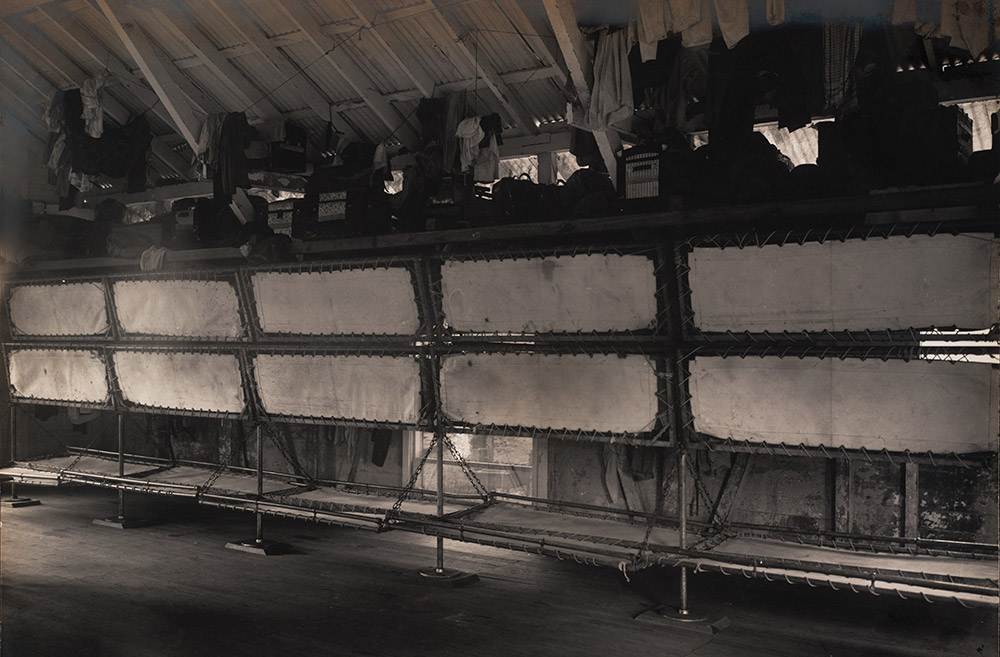 Sleeping quarters for unskilled workers.
In barracks provided for unmarried silver payroll employees, workers slept on racks of cots with no private storage space for their belongings. View in Digital Collection » 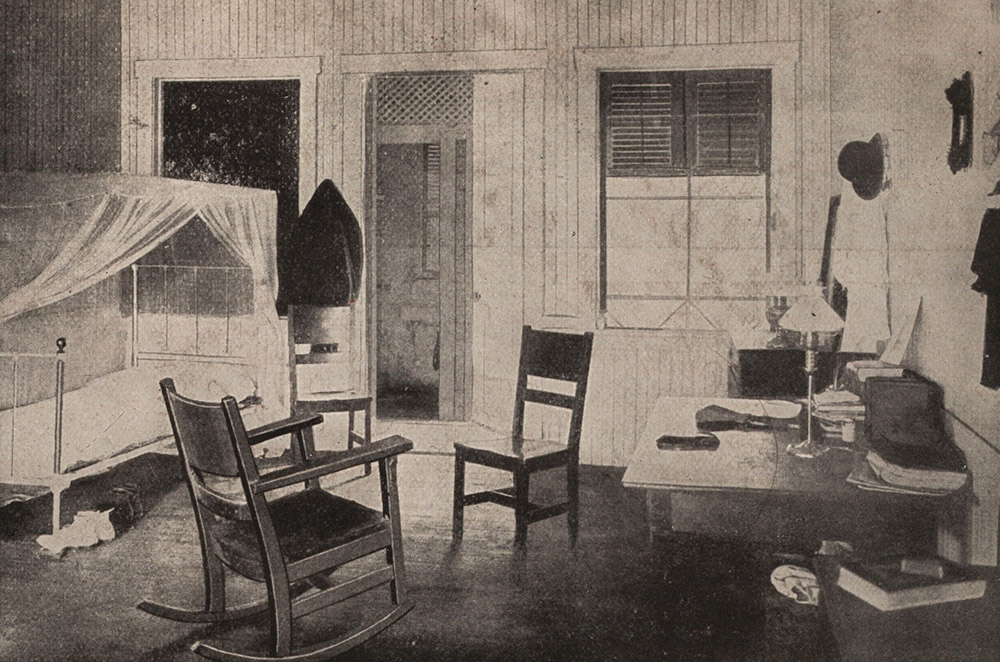 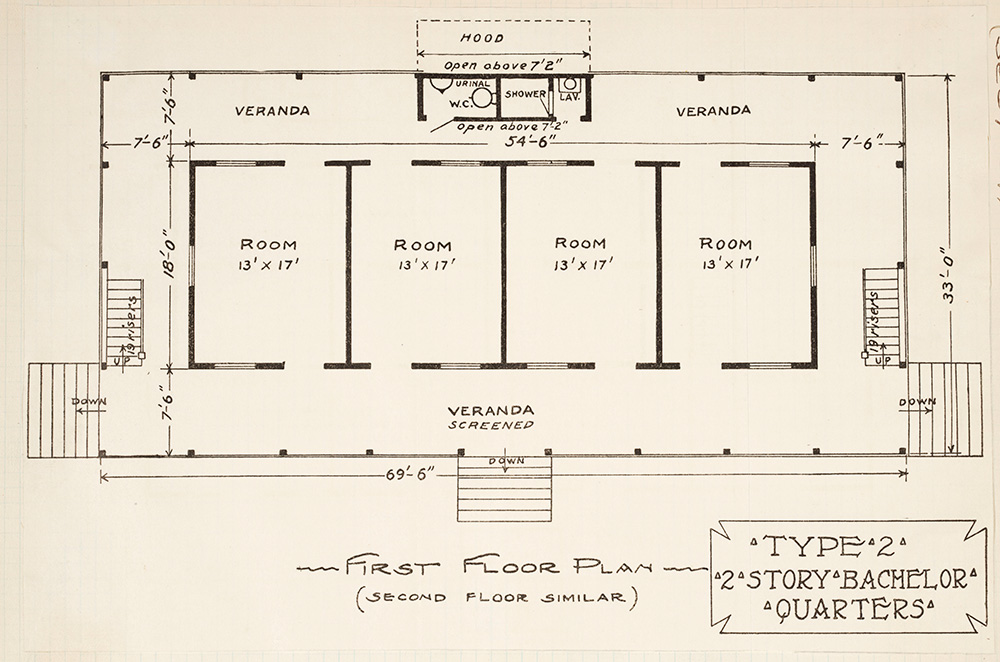 Floor plan for typical bachelor quarters.
White American workers, who were either single or had not brought their families, were housed in bachelors’ barracks. Each man was given a private room, but the number of building residents and square footage allotted varied according to monthly pay. This floor plan is for rooms about 220 square feet. More highly paid bachelors were assigned to buildings with more spacious rooms. The food was decent, but not good. The discomforts of shared housing encouraged men to move their families to the Zone so they could obtain more comfortable family housing. View in Digital Collection » 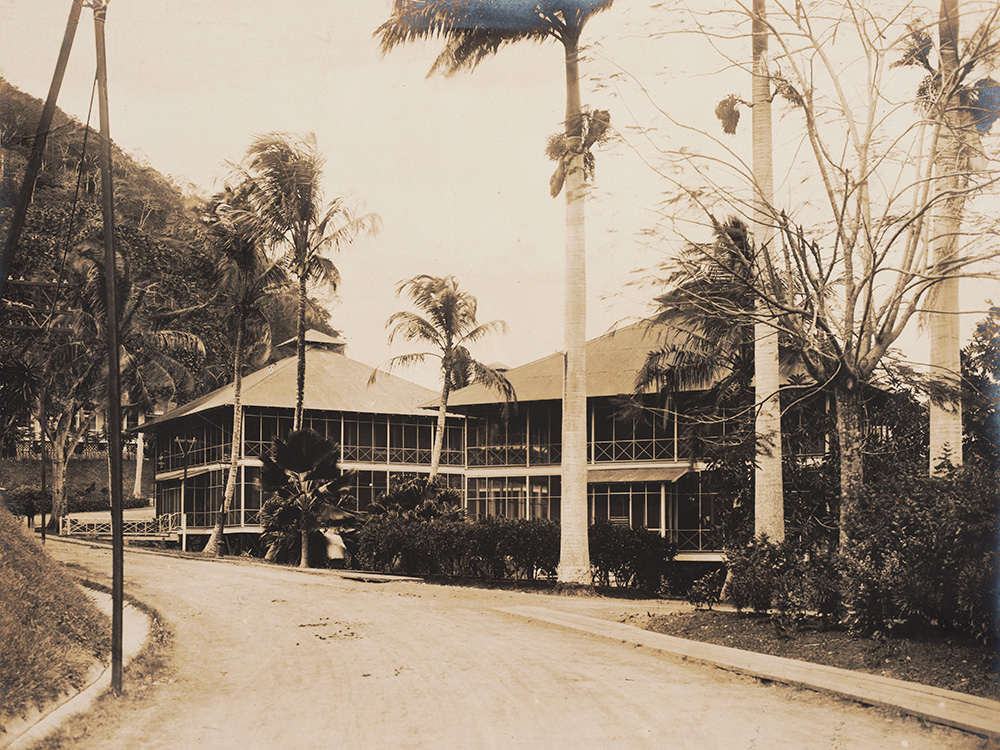 Type 13 two-story house.
The Canal Commission designed a variety of houses for white American employees. A type 13 two-story, single family house had space allotted to servant’s quarters. Two bedrooms and a bathroom were on the second floor. Workers, such as A.B. Nichols, with relatively high salaries would have been allotted a type 13 house. View in Digital Collection » 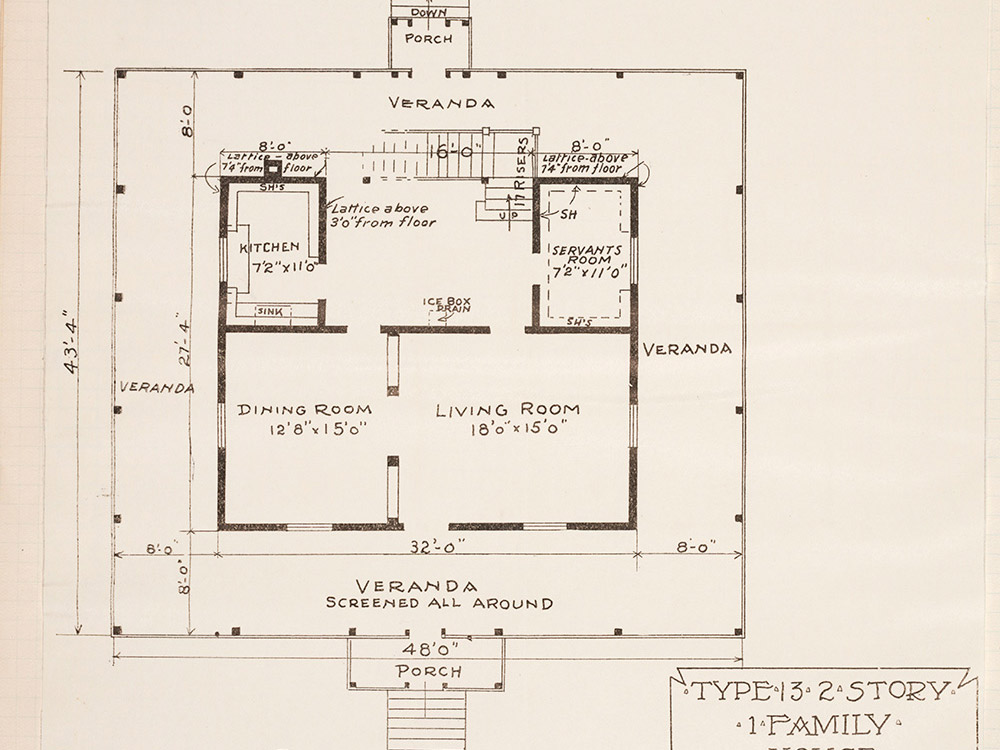 Housing was provided free to gold payroll workers. In 1905, Chief Engineer Stevens appointed Jackson Smith to oversee labor and housing allocation. Jackson’s system allotted one square foot of housing for each dollar earned per month by a gold roll employee. If a man was married, his housing allotment doubled. American bachelors without families were assigned to private rooms in two-story dormitories. In contrast, bachelors on the silver roll were housed in shacks, barracks, or even rail cars.

To keep the skilled, gold payroll workers happy and to boost morale, social activities were highly encouraged. The Y.M.C.A. club house at Culebra was typical, offering a bowling alley, billiard room, gymnasium, library, and bandstand. The cost of membership was $10 per year. Masons, Knights of Columbus, and a variety of social clubs were active in the Zone. Wives of gold roll workers usually had servants to help with the home and were urged to engage in social activities. Each town had women’s clubs, art and literary societies, and music and drama clubs. In 1907, the Cristobal Woman’s Club resolved “that every club woman in the Canal Zone constitute herself a committee of one to foster favorable instead of adverse criticism of the conditions of the Zone.” 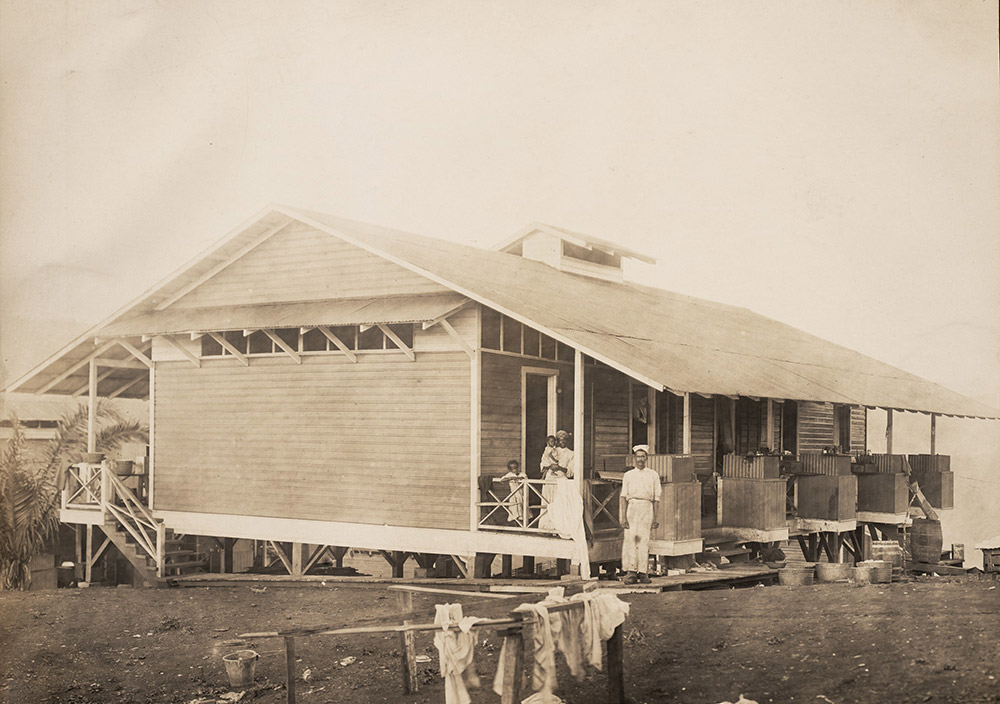 Typical quarters for ten silver roll families.
A silver payroll employee and his family were provided with a 240 square foot apartment with a cooking stove on the veranda. Silver roll wives often had to take on jobs to supplement household income. View in Digital Collection » 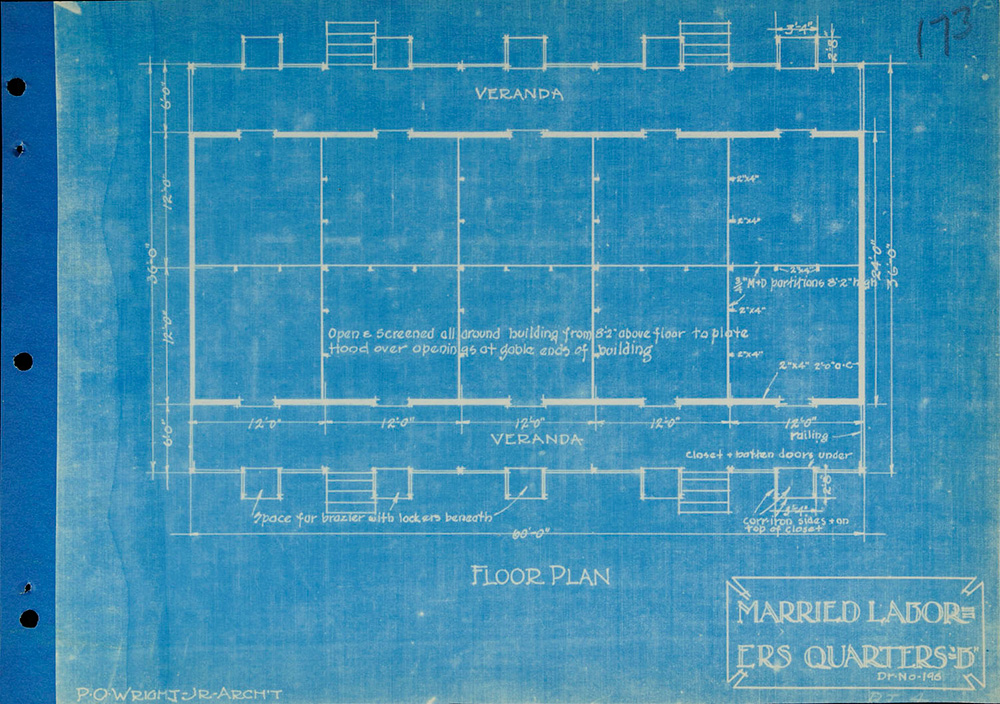 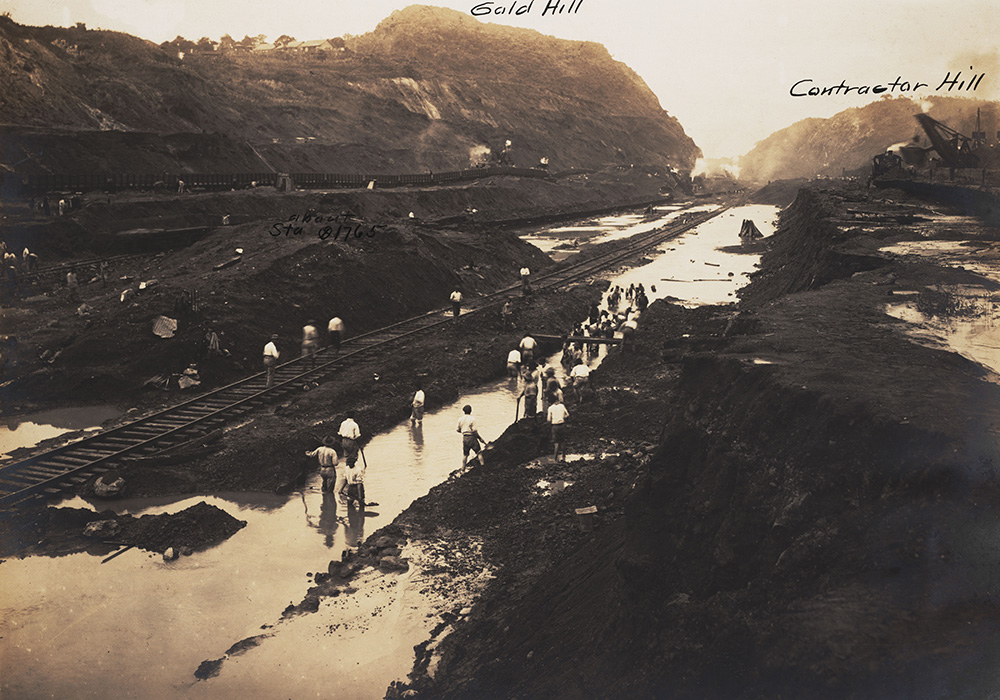 Workers excavate a pressure bulge that heaved up 18 feet from the base of the Culebra Cut.
Throughout Canal construction, unskilled laborers suffered a high rate of pneumonia. During the rainy season, manual laborers were often drenched, and sometimes worked whole days standing in waist-deep water. Some workers, especially in the early days, had only one set of clothes and wore the same wet clothes day after day. View in Digital Collection » 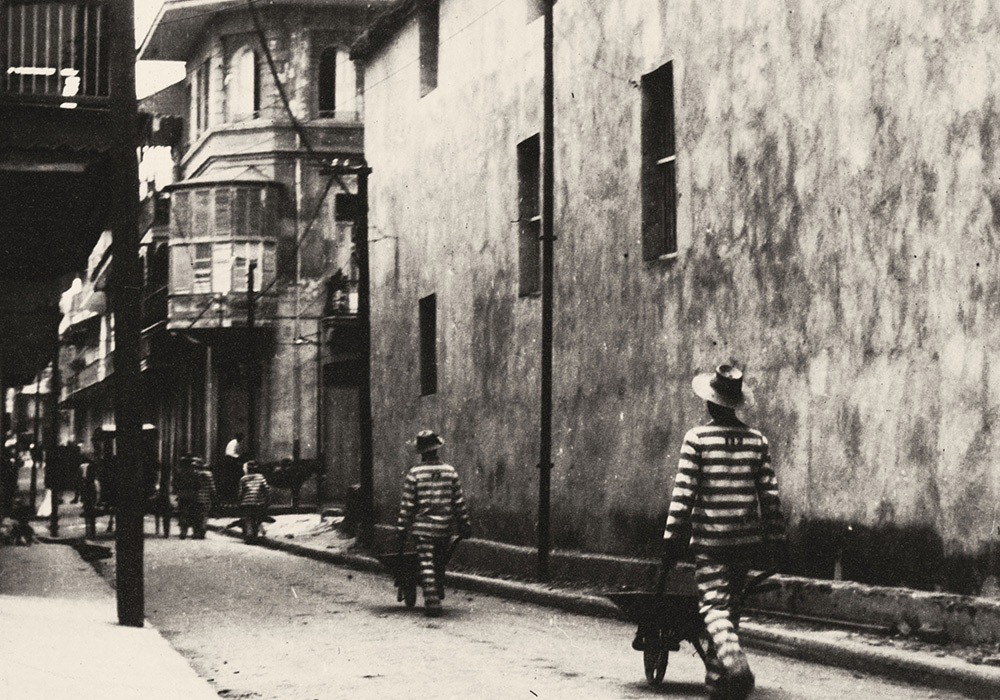 Prisoners at work in Panama City.
View in Digital Collection » 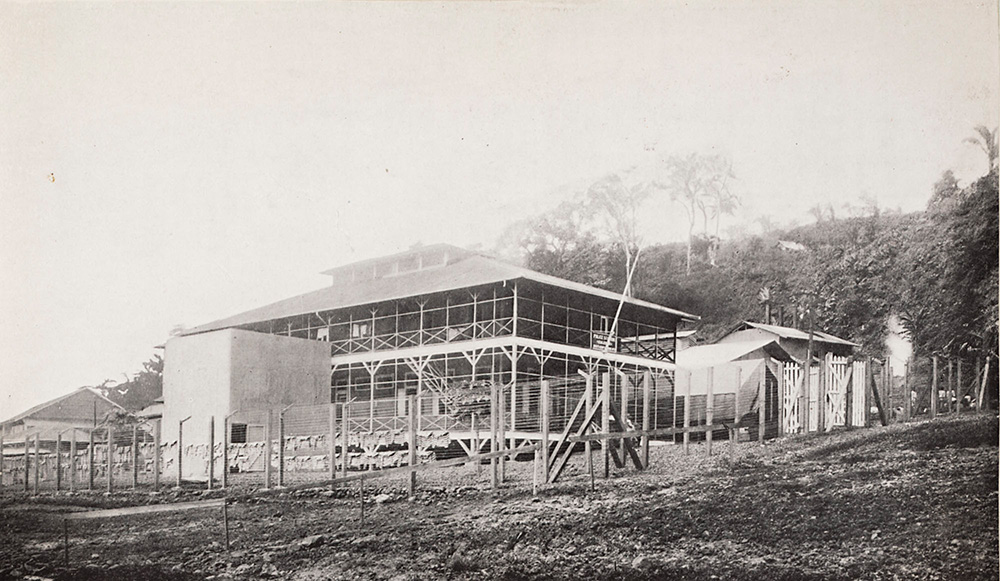 Penitentiary at Culebra.
Most arrests in the Canal Zone were for intoxication or disorderly conduct, but police also patrolled labor camps and towns gathering up idle workers. If workers could not account for their idleness, they could be arrested for vagrancy and fined. If they could not afford the fines, they were sentenced to time in the penitentiary where prisoners were required to work at hard labor, mainly building roads. Chained to a ball weighing 16 to 18 pounds, they were marched to the job site where they were required to work for 10 hours a day. View in Digital Collection » 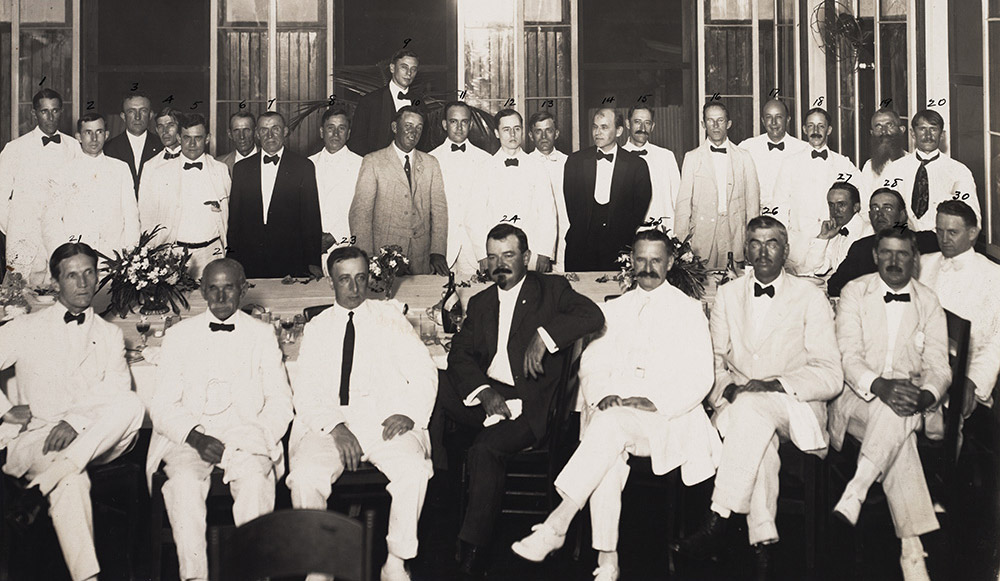 The Society of the Incas enjoys its annual banquet in 1915.
The Incas were Canal employees who arrived in Panama in May, June, or July of 1904 to initiate Canal construction. A.B. Nichols was a founding member of the Incas and served as the club’s president before returning home in 1914. View in Digital Collection »