“The locks, besides being difficult to construct, would also be much more expensive than was anticipated by the Board of Consulting Engineers.” -A.B. Nichols 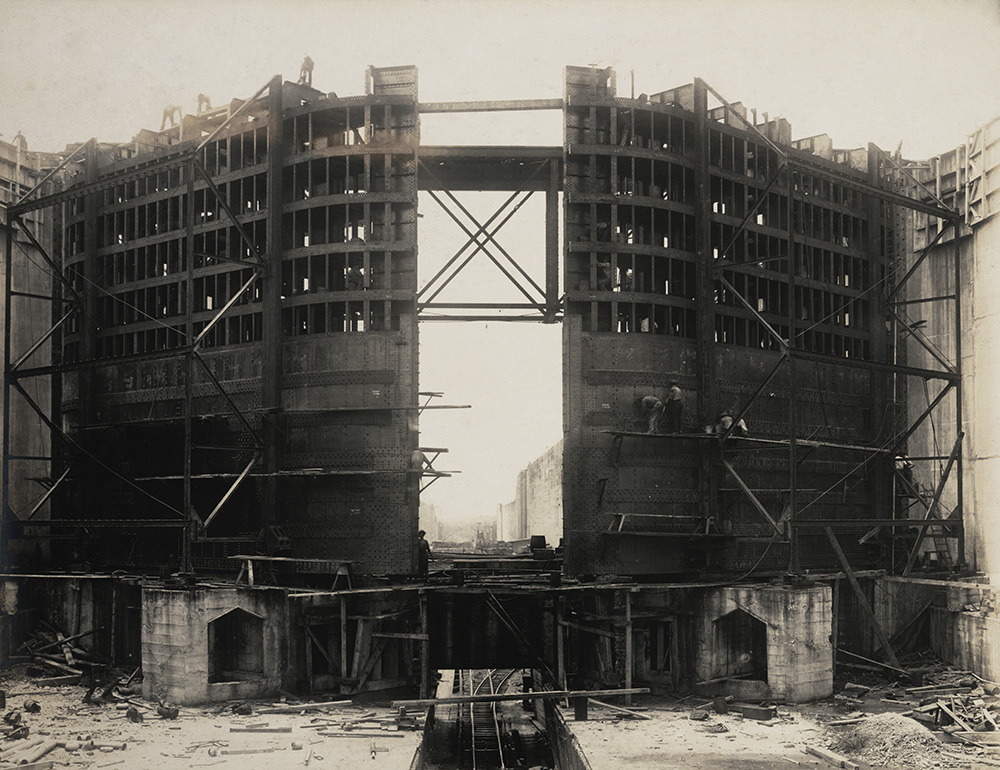 Building a set of lock gates at Gatun.
Each “leaf” of a pair of steel lock gates is massive. The leaves are 65 feet wide and 7 feet deep, but the height varies from 47 to 82 feet, depending on location. The steel gates are hollow and built as a series of water-tight compartments like a ship, so when the locks are filled, the gates are buoyant. View in Digital Collection»

Whether to build a sea-level canal or a system of locks had not been decided when the U.S. began digging in 1904. Support was strong for a sea-level canal, but it would cost more and take longer than building a locks system. Chief Engineer Stevens weighed in strongly for a locks system after seeing the raging Chagres River in flood. In 1906, by a narrow vote, the Senate agreed. 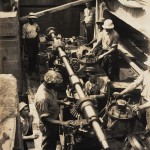 Workers build valve mechanism that will control the flow of water to the lock chambers.
View in Digital Collection »

The plan depended on building a dam at Gatun, on the Atlantic side of the Isthmus, to control the river and create a large lake that would cover much of the Canal route. Gatun Lake, with a surface 85 feet above sea level, submerged close to 164 square miles of jungle. The lake also provided the water to a system of locks to lift ships up from the sea to the lake for the trip through the Canal. Two more sets of locks, at Pedro Miguel and Miraflores, raised and lowered ships on the Pacific side of the Isthmus. 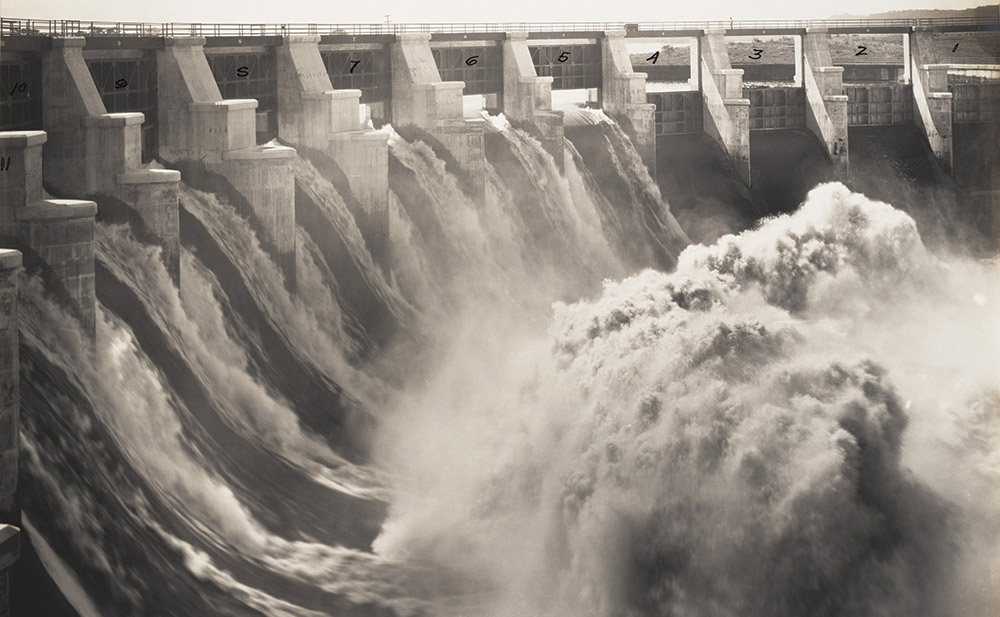 Gatun Dam spillway.
Gatun Dam harnessed the Chagres River, generating power for the Canal operation and creating a lake that would carry ships most of the way across the Isthmus. Gatun Lake was, at the time, the largest man-made lake in the world. The lake also provided the 26,700,000 gallons of water required to fill a lock. View in Digital Collection » 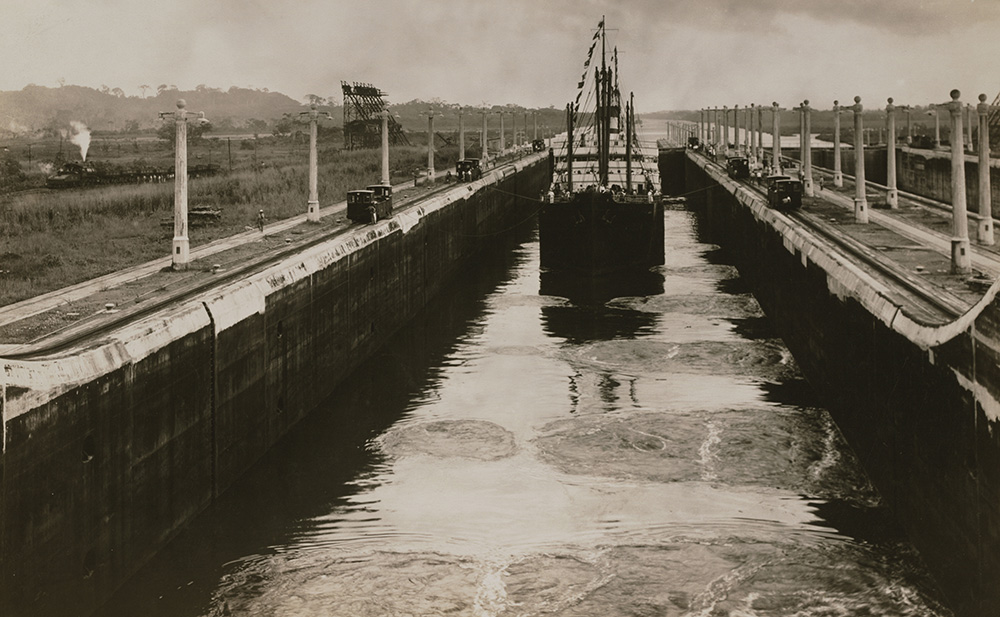 S.S. Ancon in lower Gatun locks, beginning the first official transit of the Canal.
Building the three sets of locks at Gatun required more than 2,000,000 cubic yards of concrete. Each of the chambers is 110 feet wide by 1,000 feet long, with dividing walls 60 feet wide and floors up to 20 feet thick.  View in Digital Collection » 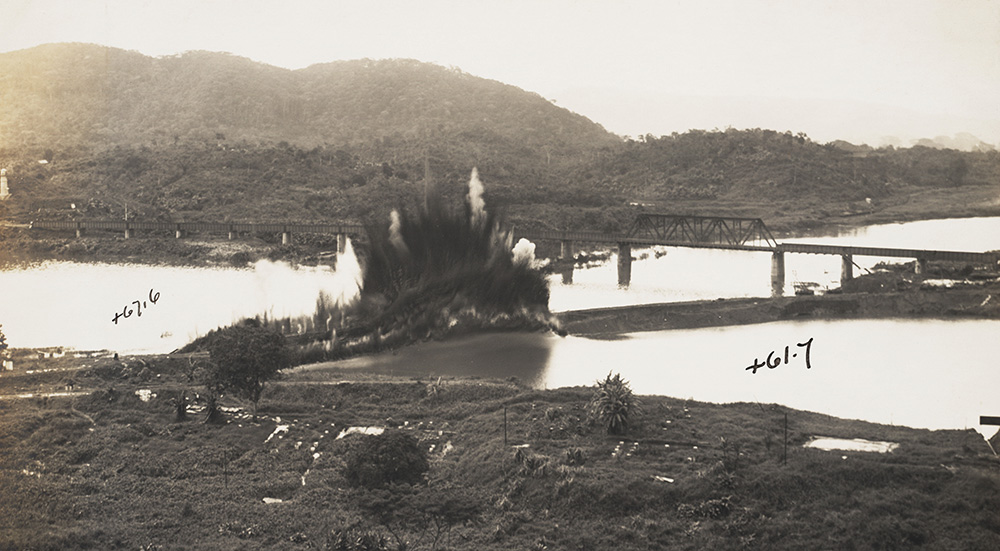 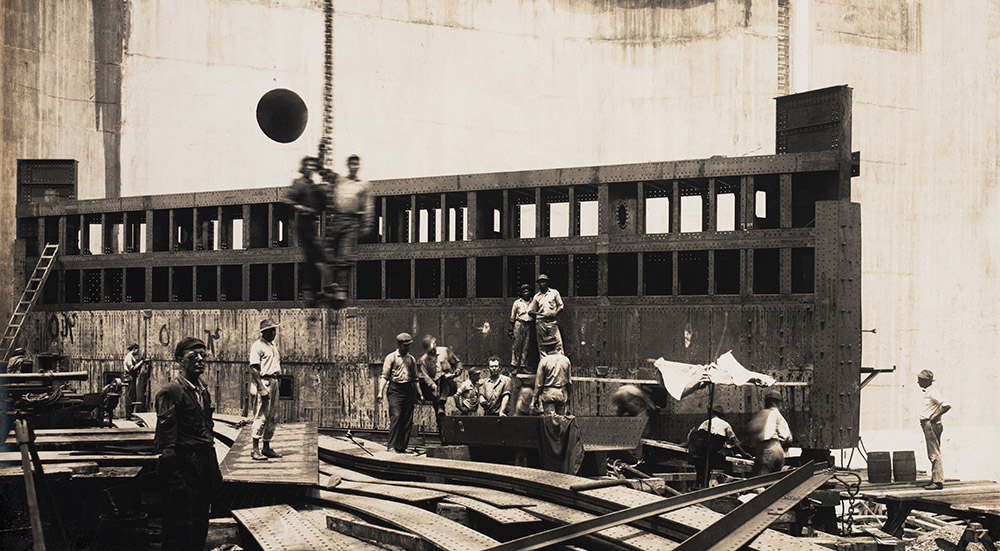 Pouring of concrete began at Gatun on August 24, 1909, at Pedro Miguel on September 1, 1909, and at Miraflores in July 1910. Workers completed concreting by September 1, 1913. During the four years of construction nearly 4,500,000 cubic yards were poured at the three lock sites. 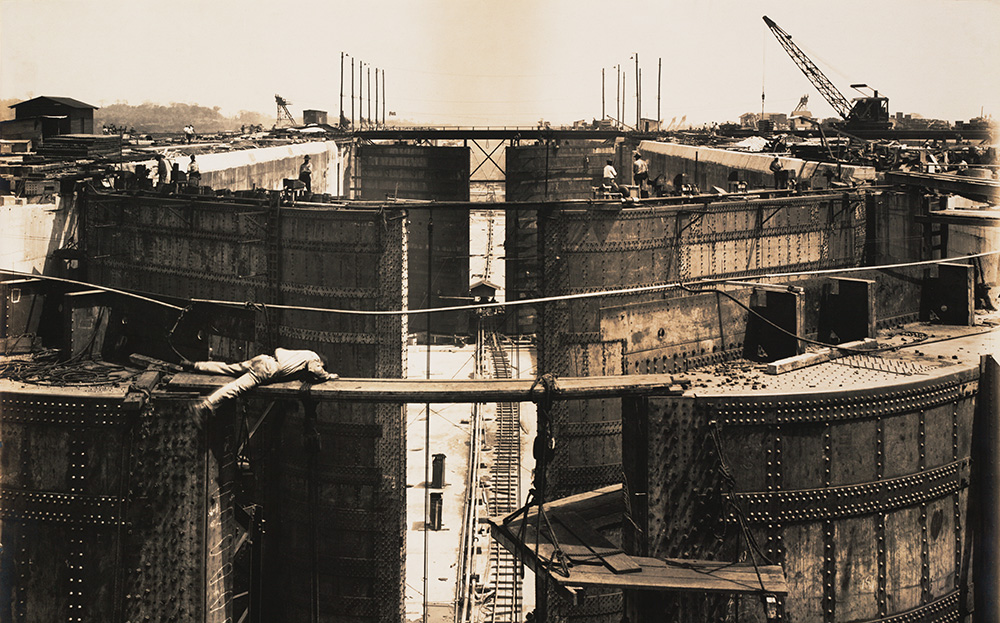 Construction worker hangs precariously over the side of a walkway between gate leaves at Gatun Locks.
Erecting the massive lock gates was one of the most dangerous construction jobs in the Canal Zone. Riveters in particular were always in danger of their rickety scaffolding, or the scaffolding above them, giving way. As many as 165 rivet gangs made up of mostly West Indian workers were employed at one time, driving over 6,000,000 rivets into the gates. At the height of gate construction, 660,000 rivets were driven in a month. View in Digital Collection »

The Canal lock system contains 46 miter gates that operate by electric power provided by Gatun Dam. When opened, the gates fit into recesses along the chamber walls, allowing the full utilization of the 110-foot width of the chamber. In 1914, nearly 95 percent of oceangoing vessels were less than 600 feet in length, much shorter than the 1,000-foot-long lock chambers. Engineers installed intermediate gates that allowed the use of 400- or 600-foot lockages, minimizing the amount of fresh water used during a transit.

In 1913, after successfully testing the locks on September 26, Culebra Cut was filled with water. On October 10, the earth dyke at Gamboa was destroyed, joining Gatun Lake with the Culebra Cut and completing the Panama Canal. The S.S. Ancon made the first official transit through the Canal on August 15,1914, though with the outbreak of World War I, the celebration was somewhat subdued. 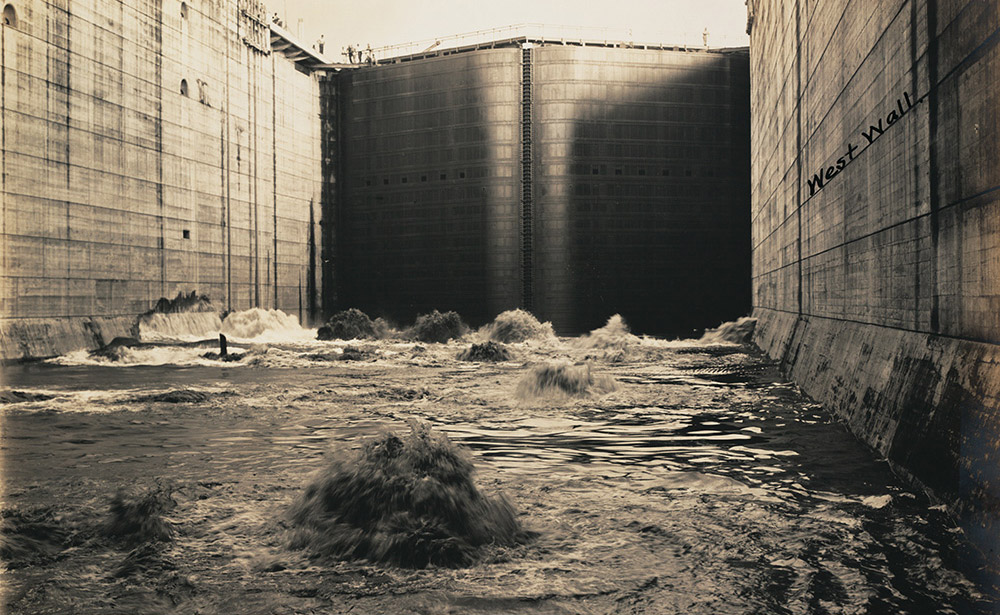 First water entering Miraflores upper lock, October 14, 1913.
A Canal lock chamber can fill with water in eight minutes. To raise a ship, fresh water is pumped via gravity through culverts that were built into the side and center walls of the locks. The culverts send water into chambers through holes in the floors. To lower a ship, valves in the chambers release water. The locks require approximately 52 million gallons of fresh water for each ship that transits the Canal. View in Digital Collection » 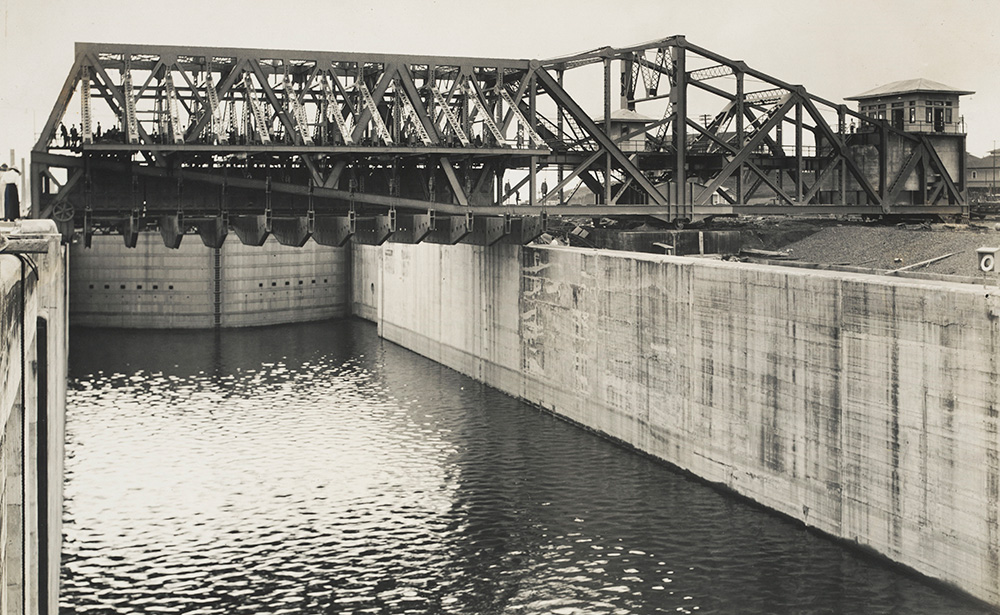 Testing of emergency dam at Gatun Upper Lock.
Water from Gatun Lake is essential to the functioning of the locks. Engineers installed emergency dams at the three lock sites as a precaution against damage to the gates that would allow fresh water to drain from the Lake. The emergency dams were steel truss, cantilever bridges that rested on lock side walls parallel to the channel. When in use, the dam arm would swing across the lock and lower six rows of panels on girders to seal the channel. The emergency dams were never used and dismantled in the mid-1950s. View in Digital Collection » 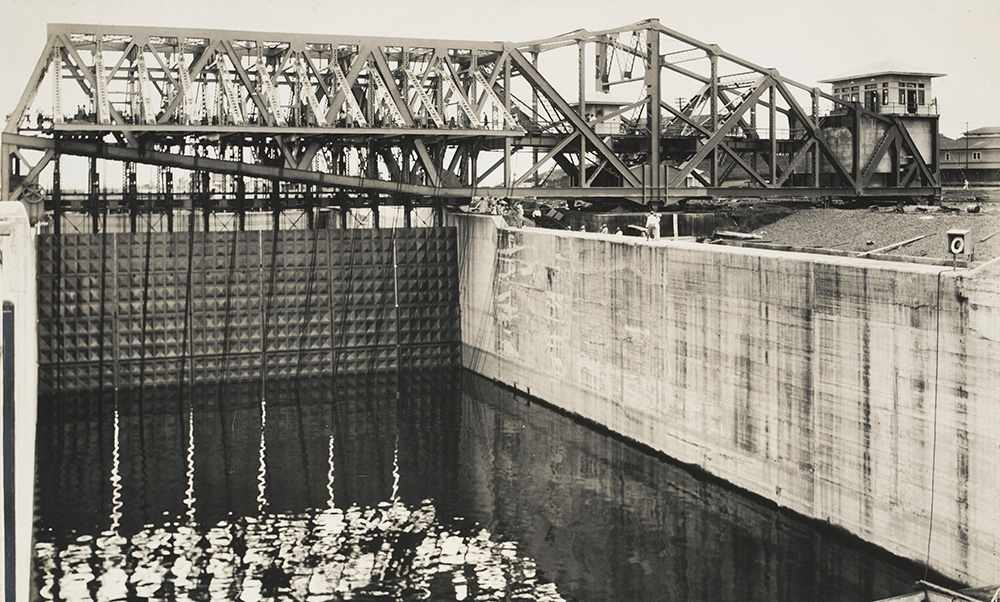 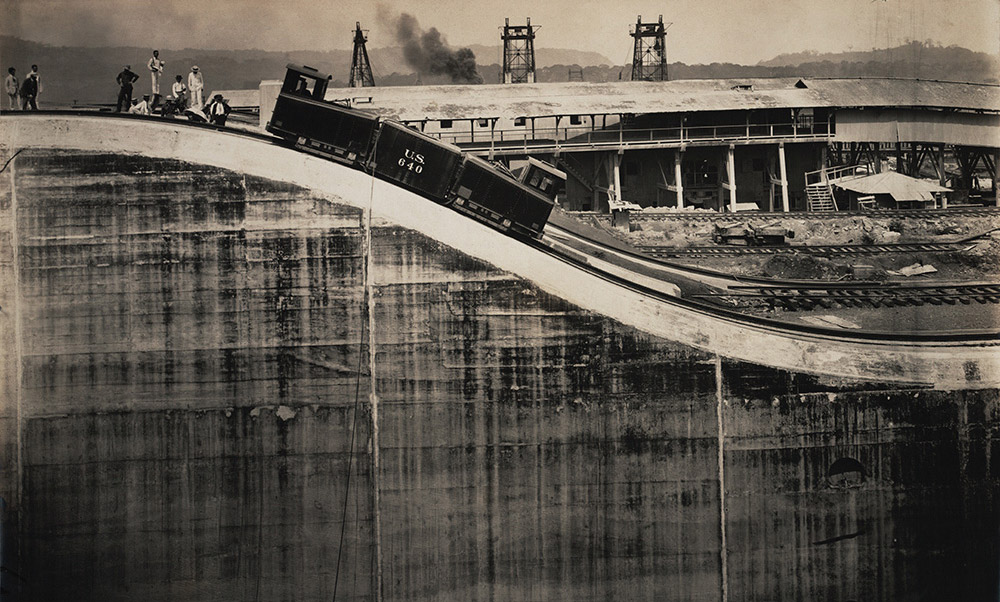 Testing a prototype towing locomotive.
Electric-powered locomotive “mules” have towed ships through the locks since its opening in 1914. The original locomotives were 32-feet long, 8-feet wide, and weighed 42 tons. The locomotives operated on 5-foot Panama Railroad gauge running parallel to the Canal. Each locomotive had a pulling capacity of 25,000 pounds and, although they towed ships through the locks at two miles per hour, they could operate at a top speed of five miles per hour. General Electric delivered 40 locomotives to the Canal Zone in 1914. View in Digital Collection »