“Early in June [1910] the Chief Quartermaster became alarmed for the safety of his house on the point of the hill…the slide having extended to within about 90 feet of the building.”
-A.B Nichols 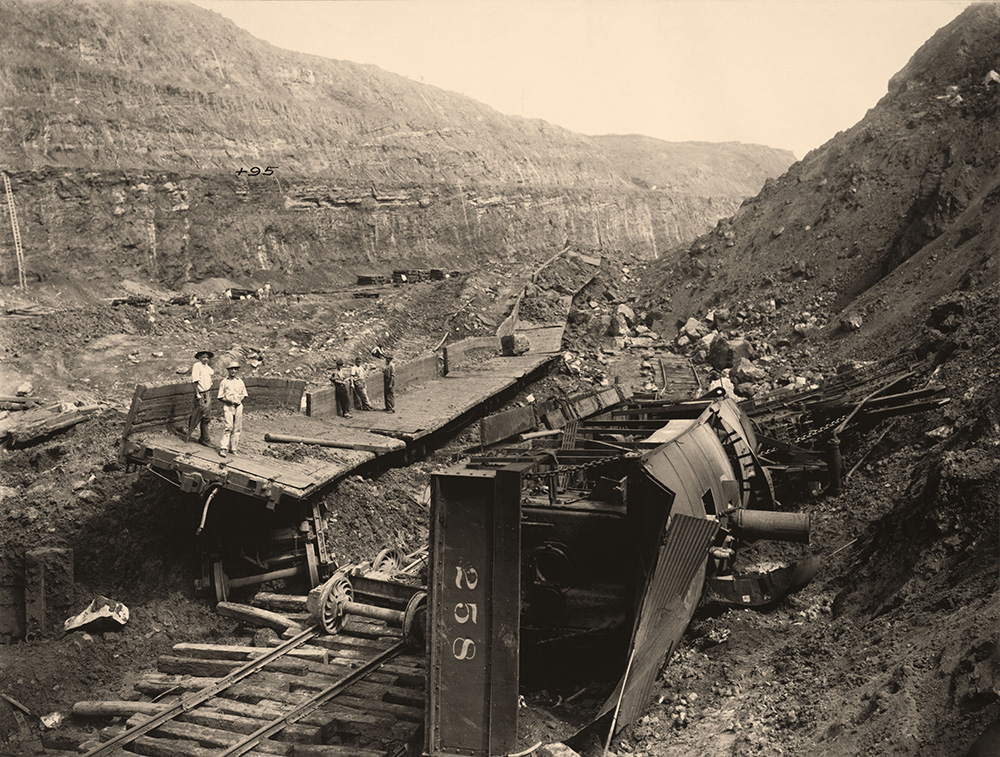 Steam shovel #258 and loaded flat cars caught in a slide at Culebra, May 29, 1913.
From 1907 through 1914, the Canal experienced over 100 slides. Some came without warning, burying workers and equipment and completely blocking the Canal. View in Digital Collection »

Huge landslides, mainly in Culebra Cut, confounded Canal engineers. The slides were of two types. Gravity slides were caused by porous, saturated material sliding down slopes of firmer, more impervious rock or clay. Deformation slides were caused by unstable rock brought down primarily by overly-steep slopes. Not only did slides dump millions of cubic yards of material back into the Canal, some slides created bulges that pushed up material from below the bed of the Canal. As the Cut deepened and the slopes grew steeper, the slides grew larger and more frequent. The only remedy was to excavate a wider channel and make the slopes less steep. Millions more cubic yards would need to be cleared from the slopes. 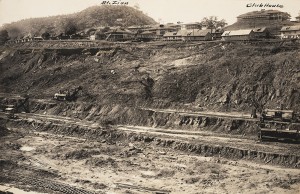 Buildings at the town of Culebra threatened by slide.
In January 1910, the buildings marked “d” along Steam Shovel Row in Culebra were close to sliding into the Cut. In November, they were dismantled and moved. One year later in January 1911, the slide had crept as far as the buildings marked “e,” which were also dismantled and moved. Eventually 75 acres of the town slid into the Cut. View in Digital Collection »

Though most landslides crept slowly into Culebra Cut, they could sometimes come without warning and bury men and equipment. The screams of accident whistles brought workers running, heading onto risky ground to try to dig out workers that might still be alive.

In October 1907, a slide at Cucaracha in the Cut was the first the Americans experienced. After days of heavy rain, a mud avalanche fell into the Cut. More mud continued to move, glacier-like, at an average of 14 feet a day for 10 days. In all, 500,000 cubic yards of material slid into the Cut. Slides continued to bedevil Lt. Col. David Gaillard, the engineer in charge of the Culebra Cut, throughout the Canal construction. In January 1912, when yet another destructive slide at Cucaracha completely blocked the Canal, Gaillard, at his wits end, asked Chief Engineer Goethels what to do. Goethels replied, “Hell, dig it out again.” 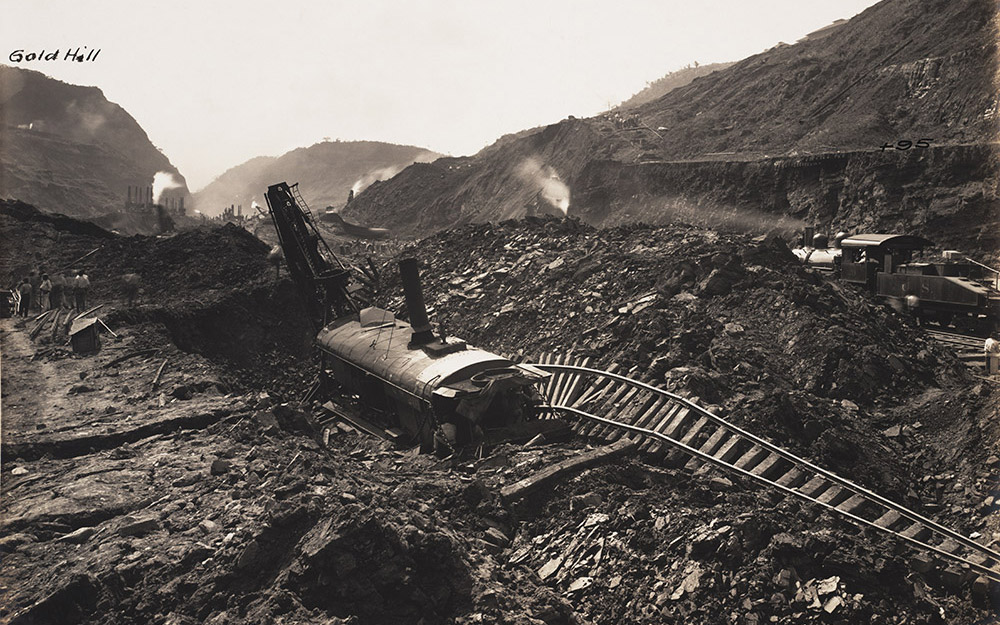 Steam shovel #201 sits amidst upheaved material, February 6, 1913.
Pressure on the sides of the Canal could cause material to push up from below and “swallow” equipment. Gaillard described standing on ground in the Cut that rose six feet in five minutes with a smooth almost imperceptible motion.  View in Digital Collection » 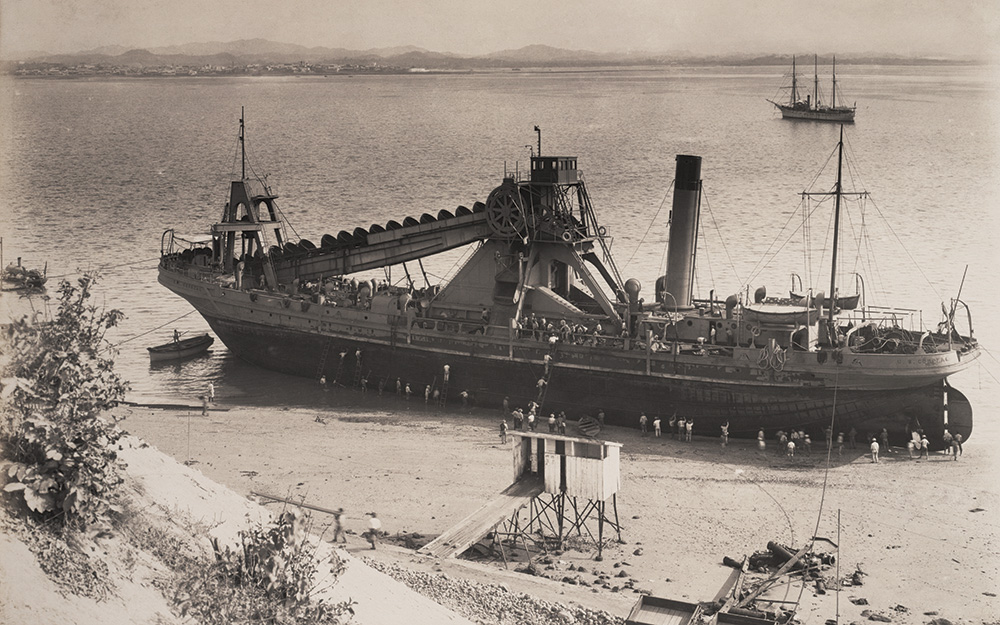 The 269 foot ladder dredge Corozal beached for repairs, June 1912.
Ladder dredges were used to remove material under water. The Corozal was designed to remove both soft soil and hard rock. It was used to excavate 4,000,000 cubic yards of rock and boulders at the Pacific entrance to the Canal. View in Digital Collection »

Searching for survivors after a premature blast at Bas Obispo that killed 26 and injured 49 men, December 12, 1908.
On December 12, 1908, shortly after 11 am, two explosions at Bas Obispo unexpectedly set off 44,000 tons of dynamite, throwing men and steam shovels across the Culebra Cut. Almost 60,000 cubic yards of rock filled the Canal, 20 to 30 feet deep in some places. Chief Engineer Goethals reported that the cause was acidic water in the blast holes, but some engineers involved believed the actual cause was never determined.  View in Digital Collection »

Slides were not the only danger. Racing trains, swinging cranes, explosions, drowning, and falls from scaffolds were just some of the ways a man could die or be maimed at the Canal. Surrounded by the noise, dust, and smoke from locomotives, steam shovels, blasting, and hundreds of rock drills, staying alert was not easy.

Working with explosives was one of the most dangerous occupations on the Canal. Chief Engineer Goethals blamed the frequent accidents on worker incompetence, but explosives could become unstable because of the climate, lightning could ignite a blast, and steam shovels sometimes hit unexploded charges. A phenomenon known as “hot rock,” caused by sulfurous blasts of hot air from iron pyrite oxidation or water vapor from moving rock, could also ignite charges. Or, there might be no satisfactory explanation, as was the case in the worst accidental blast at Bas Obispo in 1908 that killed 26 men and wounded 49. 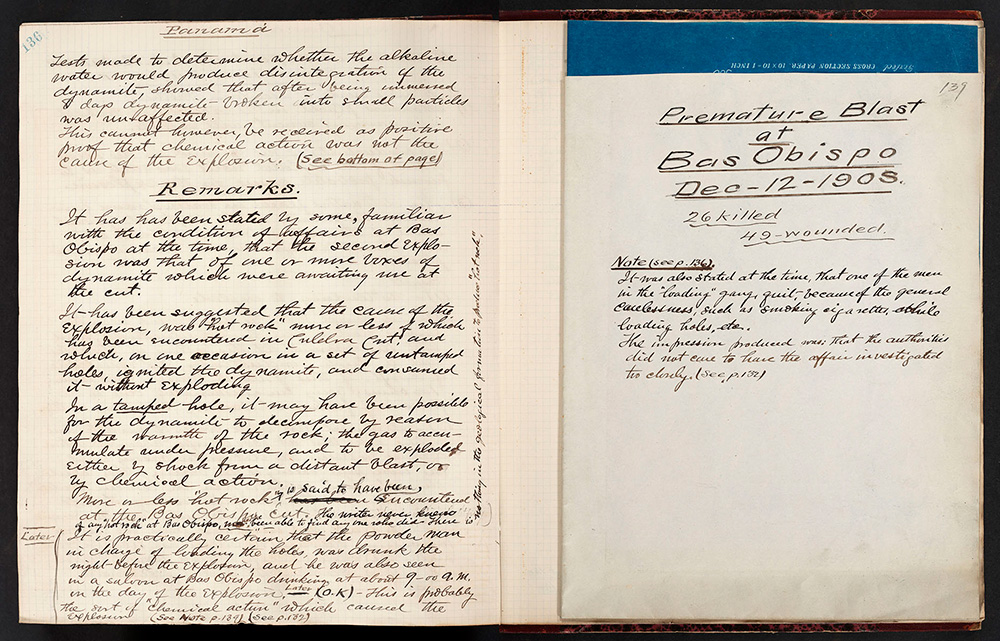 A.B. Nichols comments on the cause of the Bas Obispo blast.
A.B. Nichols disagreed with the official findings that acidic water caused the blast, citing a report that said the water at Bas Obispo was alkaline. Nichols agreed with the chemical reaction theory, but suggests, perhaps jokingly, that the powder man’s drinking the night before and earlier in the day might have been the “chemical action” that caused the explosion. View in Digital Collection » 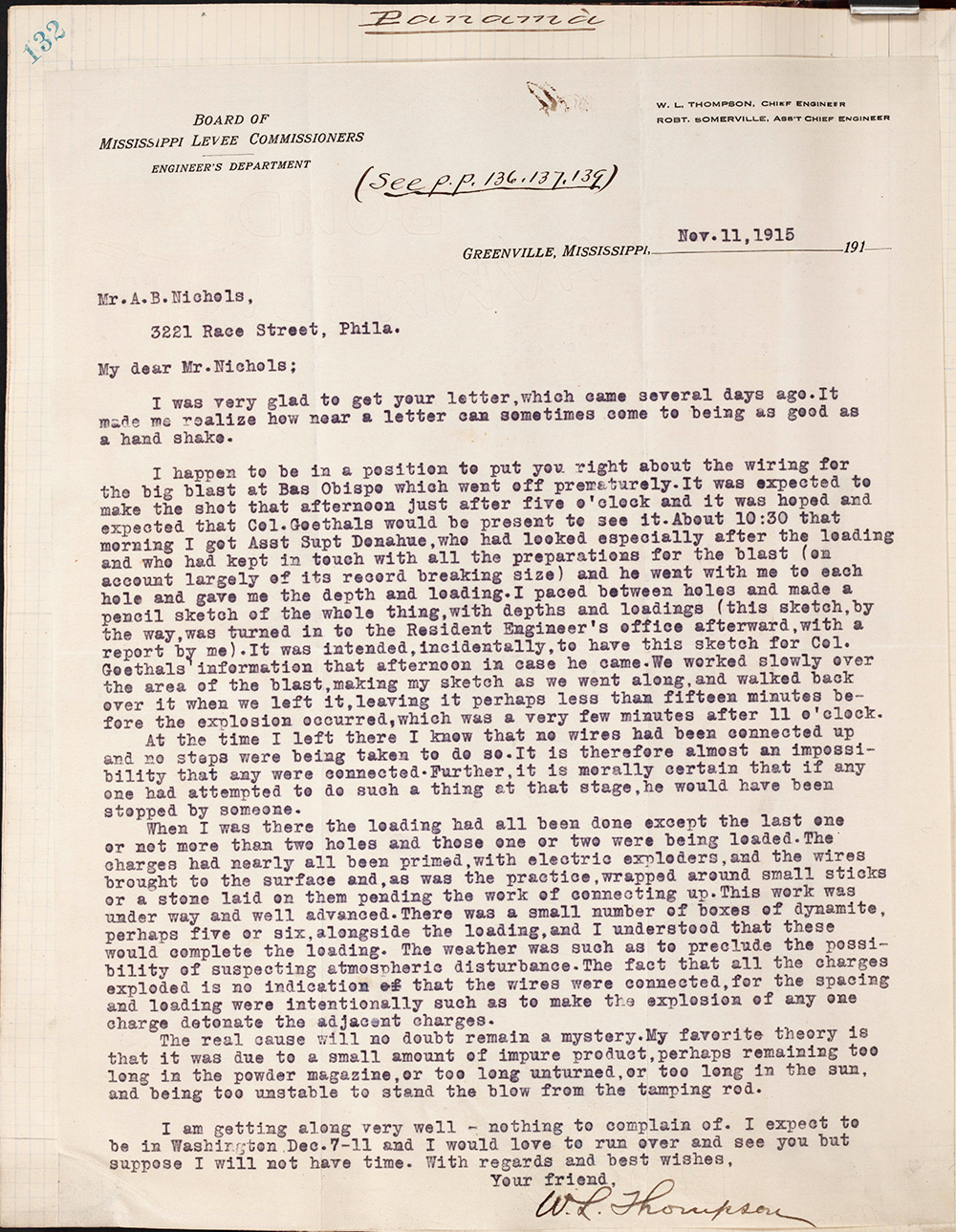 Letter to A.B. Nichols from W.L. Thompson, the engineer who had inspected the preparations for the Bas Obispo blast.
Nichols continued to try to investigate the cause of the blast after he retired to Philadelphia in October 1915. In November, he received a letter from W.L. Thompson, one of the engineers involved in setting up the explosives, clarifying that at the time of the blast the charges at Bas Obispo were not attached to the wires that would fire them. Thompson suspected the blast was caused by a chemical reaction in the explosives, but he says the real cause would “no doubt remain a mystery.” View in Digital Collection »

Dredges continue to work at clearing the Cucaracha Slide, January 28, 1914.
A.B. Nichols was fascinated with trying to solve the problem of landslides. Gravity slides were familiar and often happened in the wet season. In contrast, deformation slides resulting from unstable rock were unpredictable, with some of the worst happening in the dry season. In this set of photos, Nichols tracks a new area of slippage at the Cucaracha slide and continued to make diary entries on its progress throughout 1914.  View in Digital Collection »

Records from the American period of construction document 5,600 deaths, of those, 350 were white Americans and 4,500 were non-white, mostly West Indians. However, the number of West Indian deaths is likely underreported because many lived in the cities outside the Canal Zone and some causes, typhoid fever for example, were not always included in the statistics.
*Title of a popular work song of the day. 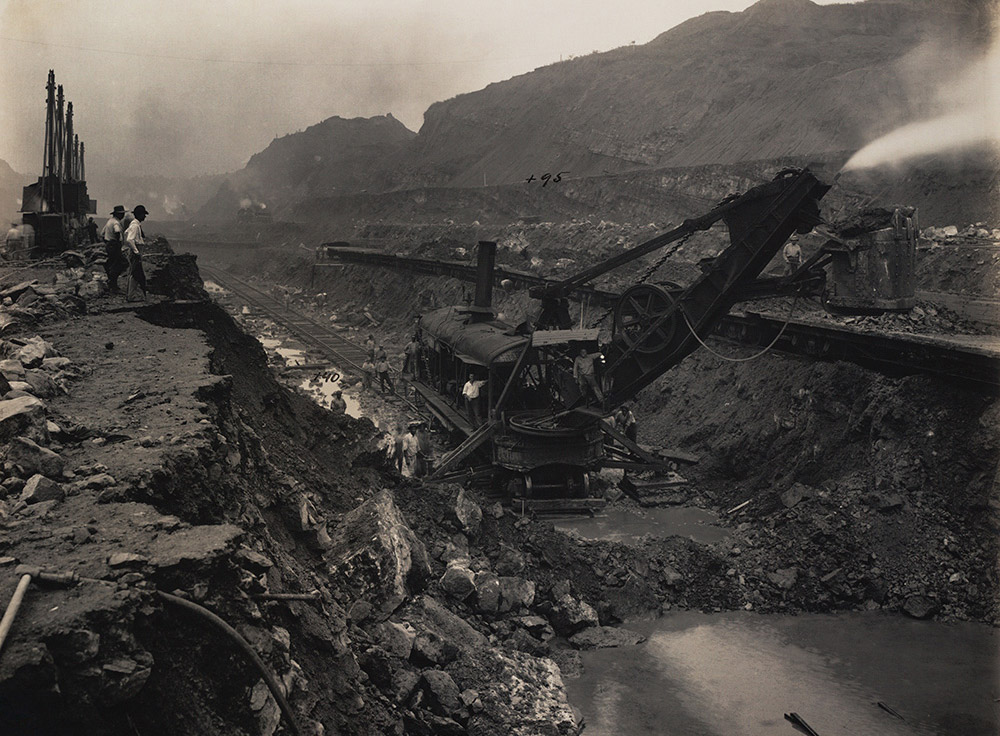 Workers gather around steam shovel #222 after completing bottom pioneer cut in Culebra Cut, May 20, 1913.
After years of digging and blasting through the continental divide, steam shovels #222 and #230 finally faced one another on the bottom of the Cut, at 40 feet above sea level.  View in Digital Collection » 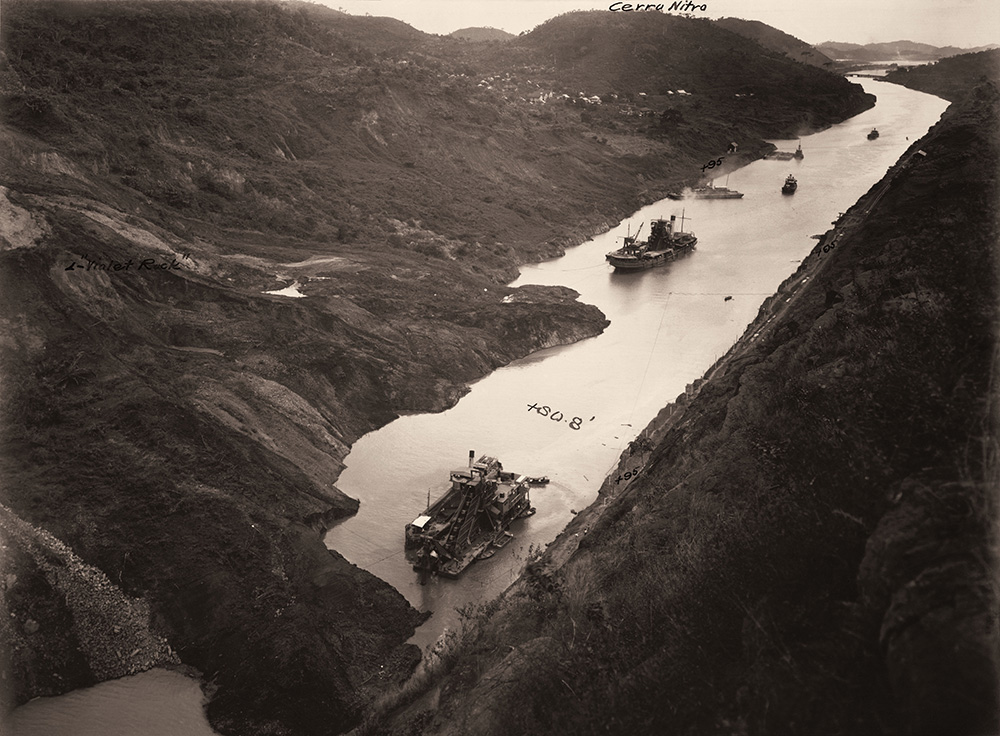 The old French dredge Marmot and the dredge Corozal at work in Culebra Cut, December 3, 1913.
Though excavation at Culebra Cut was “finished” in May 1913, a slide at Cucaracha still blocked the Canal. Chief Engineer Goethals decided to release water from Lake Gatun in October 1913 to fill the Canal and use dredges to clear the slide.
View in Digital Collection »